All Signal Transmitters, including CB Radios, require a tuned antenna system. Best performance is achieved when the output circuit of the CB Radio “Matches” the system. The system includes the Coax Cable, the Antenna Mount the Antenna and the Vehicle.

All CB Antennas should be tuned when they are first installed or if you have complaints from customers, about poor transmission distance.

All testing must be done in an open area. Stay at least 20 feet away from buildings and never perform tests in a garage or carport. The doors, hood and trunk of the vehicle must also be closed. Oversight of these recommendations will result in inaccurate readings.

The SWR Meter must be place in line behind the CB Radio. Check the Instruction Manual that came with the meter. Measure and Record the SWR on Channels 1 and 40. This Information will determine the need for tuning as well as the steps to take.

Measurements and determination of short or long conditions are the same as the Single Antenna procedure. However, when tuning co-phased Antennas, it is possible to adjust both Antennas in equal amounts to keep them in perfect balance.

Antennas can be tuned one of two ways.  Either by adjusting the dimensions or with a matching network typically consisting of discrete components.  Typically changing physical dimensions is not an option, so a discrete network is placed just before the antenna input.

The challenge with tuning an antenna is that its impedance is affected by nearby materials.  If you tune the antenna to 2.4 GHz on your bench and then place it in an enclosure, the tuned frequency will shift.  Figure 3 below demonstrates this effect.  The red line is the antenna in free space, unmatched.  The green line represents the same antenna now matched in free space.  And the blue line is the final antenna response with it placed in the enclosure.

Further complicating the matter, no two materials affect the antenna the same. For example, a common mistake is to use a prototype enclosure that is similar in size and shape but not made of the same production quality material. Even by changing the PCB material a trace antenna is printed on can cause the impedance match to change. The tuning of the antenna must always be rechecked if anything in the enclosure has changed, even objects several centimeters away can have an impact.

When deciding on a location for the antenna in your product, consider the following questions:

1) What is the enclosure made out of?
2) What will be near the antenna?
3) Is there metal nearby?
4) How will the device be used?
The material that your enclosure is made out of will dramatically affect how it tunes. Metal is extremely detrimental to antenna performance because it is conductive. Even paints with a very low percentage of metal in it will have a significant impact. Keep all metal objects (including PCBs) as far away from the antenna as possible. Electromagnetic fields create currents on metal objects, which turns them into small radiators.
Not only does this hurt the match, but it will significantly reduce the gain pattern of the antenna. Additionally, the final use of the product must also be considered. Will the antenna be covered up by a hand? Will the product be mounted on a metal wall? All this can impact the tuning.

When it comes to tuning an antenna for its enclosure, there are many considerations. The process of tuning the antenna is difficult and time consuming. In many cases there are other PCBs, housing materials, batteries, display screens, metal brackets, and various other harmful objects nearby. All of these affect the tuning and must be present.

The antenna location should be one of the first things considered when developing a new product; but it is often the last component to be finalized.

If the SWR on Channel 40 is greater than that on Channel 1, then our Antenna is considered to be TOO LONG and a REDUCTION of Physical Height will correct this situation. To do this, simply remove the tip of the Antenna and cut off 1/4″ at a time until the reading is acceptable. Also, making short slits in the plastic covering of the antenna, as well as unwinding and clipping of the wire, works well.

If the SWR on Channel 1 is greater than that on Channel 40, then your Antenna is considered to be TOO SHORT and INCREASING the physical height, will correct this situation. Because Everhardt CB Antennas are made Extra Long, SWR Readings which indicate “Short”, normally stem from ground plane deficiency(Lack of Vehicle metal surface, for the Antenna to reflect it’s signal from). This condition is often corrected by adding a spring to increase the physical height.

If our Steel Series of Antennas shows TOO LONG-Simply loosen the set screw on the side of the “Whip Holder” and lower the ship into the coil 1/4″ at a time-Tighten the screw, then take SWR Reading.

If our Steel Series of Antennas shows TOO SHORT, Simply loosen the set screw on the side of the “Whip Holder” and pull out the Whip from the coil 1/4″ at a time until satisfactory SWR is achieved.

NOTE: If the ship “Bottoms Out” before satisfactory SWR is achieved, cut off 1/2″ from bottom of the Stainless Steel Whip and make final adjustment 1/4″ at a time.

WHEN NO ADJUSTMENT IS NECESSARY

If measurements are below 2.0 to 2 on both Channels, 1 and 40, it isn’t necessary to make any adjustments unless you want to fine tune the system to balance the SWR at both ends of the frequency band. However, keep in mind that if the SWR, regardless of the Reading, is the same on Channels 1 and 40, adjustment to the Antenna will generally have a negative effect.

NO METAL – NO PROBLEM

These Antennas work even if you hold them in your hand! 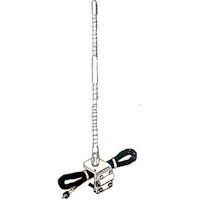 Since it is generally easier to reduce the physical characteristics of the Antenna. All of our Fiberglass CB Antennas are made on the longer end of the Specifications. If any tuning is required, 98% of the time this will entail a physical reduction. In any case the ultimate goal is to achieve an SWR Reading below 2.0 to 1 on any and all Channels from 1 to 40.

Home
Products
About Us
Contact Us
Tuning CB Antennas